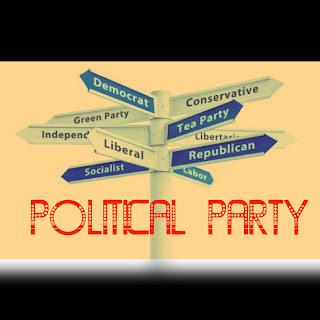 Political party can be defined as set of people or group that rise together with the same political  ideology and opinion and working together with a sole aim of controlling government through a constitutional means into political positions.

Political party varies according to the acceptance of each country electoral commission which derives its power from the constitution, the electoral commission of each country serves as the only body who can legally registered the amount of political party that will contest in an election, they serve as the one through body that charges fee for registration of party and so on.

In countries like Britain, there is the existence of only two political party, the first is the Labour party and the second is Conservative party. This two party are the two legally recognized by the law of their land, before one can vote or probably want to join or also take part in the electoral process, one has to belong to one of this party because it is the two main legally recognized, though others may exist but might not be back up by the law and for such they serve as affiliate to the main parties.

As one could deduce from the issue of Britain one could see clearly that is a two party country compare to countries like Nigeria where multi-party system existed, as at the Nigerian last election in 2015 the total number of political party registered was over 53, though there are two major leading party that has gain more ground of which are the APC ( all progressive congress ) and PDP ( people’s democratic party)

Thanks for getting this here, we are so grateful.. Have a nice time.