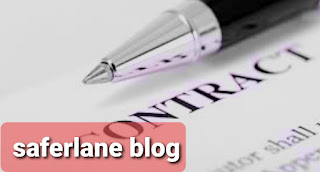 What is contract? Contract are agreement that are legal enforceable. A contract may involved a duty to do or refrain from doing something and the failure to perform such duty is called BREACH OF CONTRACT.

The law provides remedies if a promise is
breached  aiming to the person wronged to position they would occupy if the contract had not been breached, rather than punish the breaching party. It is important to know that advertising law is generally governed by the common law rules of contract.
The existence of a contract required:
A contract may be express or iimplied. An express contract is one, whose terms are stated in words. An implied contract is one, the existence and terms of which are manifested by conduct. A unilateral contract is one in which there is a promise to pay or give other consideration in return for actual performance. A bilateral contract is one in which a promise is exchanged for a promise. In most case contract can be either written or oral, but oral contracts are more difficult to prove and in most jurisdiction the time to sue on the contract is shorter. To be legally biding as a contract, a promise must be ecchanged for adequate consideration.
Adequate consideration is benefit of detriment which a party receive which reasonably and fairly induces them to make the promise or contract. Therefore gift are not supported by adequate consideration and the promise to make a gift is generally unenforceable.
Contract are mainly governed by state state statutory and common (judge-made) law and private law. Private law generally refers to the terms of the agreement between the parties, as parties have freedom to override many state law requirements regarding formalities of contracts.
The uniform commercial code, which has been adopted in some form in nearly every state, governs important categories of contracts related to particular activities or industries may be highly regulated to particular activities or industries may be highly regulated by state and/or federal law.
ELEMENT OF CONTRACT
There are legal exemption to most of this conditions, and all of them are subject to interpretation in the court. Furthermore, some contract do not meet this requirements, such as implied contract and those created under promissory estoppels.
Contract not entered into voluntarily aare voidable, for example, a company might tell the supplier that it was considering ending their business relationship if, within the next ten minutes, the supplier did not sign a contract to produce materials at certain cost. If the supplier then agree, it might be able to convince the Courts that it did so under duress or undue influence, and therefore was not bound by its terms. In misinterpretation are voidable by injured party.
Contracts are also void if they involve a promise that is illegal or violates public policy. For example a contracts regarding the sale of illegal drugs is unenforceable. Likewise, contract that are legal but are not in public interest on borrowed funds could be deemed invalid by the courts.
Similarly, a retail company that required an employee to sign an agreement that he would likely not be able to enforce the contract because it had unreasonable restrictions or imposed undue hardship on this worker.
TERMS OF CONTRACT
See also  What is Disappointment? How to Overcome Disappointment