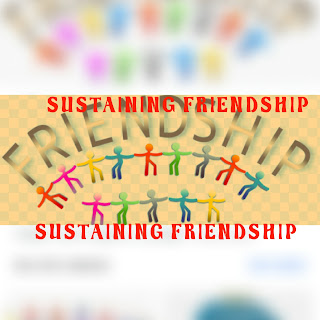 Friendship to some is a long life process but to some who don’t really cares think of it has the best way to stab people at the back or revenge, but I will tell you that friendship is worth sustaining because is the act of keeping people together or making them stay long with each other.

Though in life we all in one way or the other went through tough path with our love once but behold if one have a consistent spirit, my dear I will tell you that you are good to go, the essence of loving people or caring for them is not just only for now purpose but it is for the sole aim of what I called future, future is one of the unforeseen and unpredictable thing that will happen later to someone.

The best way to keep friendship moving or going are many which I will make mention and explain some of them, the ways are as thus :

I hope all is said and we have  helped in one way or the other and I would like you to subscribe to our blog in order to get a fresh and new posts every time we drop them.
Thanks for stopping by, we loved you and we will like you to come back next time, goodbye for now, have a lovely day.
See also  MEANING, ATTRIBUTES,BENEFITS OF DISCIPLINE AND CONSEQUENCES OF INDISCIPLINE